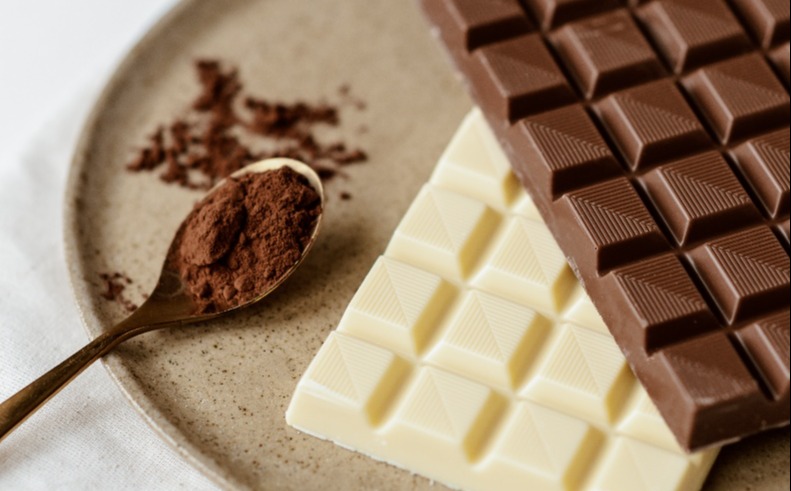 What is chocolate tempering?

You know a good chocolate as soon as it hits the mouth. A quality chocolate relies on a crucial step in the manufacturing process. In the chocolate making process, the step known as tempering gives chocolate a desirable gloss, snap, texture, and melt. Proper tempering also helps extend a chocolate’s shelf life by preventing fat bloom. Fat bloom is when a white or grayish film on the surface of the chocolate forms. Bloomed chocolate, though edible, has been affected in terms of its taste, texture and enjoyability.

This article was guest written by Jarvis A. Stobbs, Plant Imaging Lead and Associate Scientist at the Canadian Light Source Synchrotron and Food Chemistry Masters student at the University of Guelph.

Tempering is the process to direct the crystallisation of cocoa butter, a major component of all chocolate. Cocoa butter has at least six crystalline forms, otherwise known as “polymorphs”. Each have a different melting point (Figure 1) and mechanical properties. The specific polymorph a chocolatier or manufacturer is after is known as polymorph V. A quality chocolate is said to have as much of the cocoa butter fats solidify in as many of these form V crystals as possible while reducing any form IV or form VI crystals. The former melts too easily with poor snap while the latter form VI melts at too high a temperature and is too hard.

The importance of tempering chocolate

Tempering is far from straightforward and is almost entirely responsible for the final chocolate quality, therefore, much effort is put into making it as reproducible as possible. The tempering process begins with a molten material and cools until crystals begin to form. The crystals formed under static conditions can form a mixture of all cocoa butter polymorphs except form V and VI.2 Therefore, during cooling the chocolate must be agitated and cooled to very specific temperatures to enable the nucleation and selection of form V over the other 5 forms.

During uncontrolled cooling at low temperatures, form II, III and IV are all possible. The trick to tempering is to achieve a high generic nucleation of cocoa butter, followed by reheating above form IV’s melting point, while remaining below form V’s melting point. This hopefully melts the undesirable forms, while allowing the desirable form V to survive. The remaining molten cocoa butter is influenced to crystallise in the desired form V polymorph when cooled again.

Some tempering methods add small amounts of properly tempered chocolate to help facilitate the growth of form V. This method achieves this by acting as a nucleation surface for the desired form V crystals to continue growing from. These properly tempered chocolate particles are referred to as “seed” crystals. Given the close range and ambiguity of the melting temperatures of form IV and V crystals, this process can be finicky and difficult to accomplish consistently. Industrial scale manufactures have large, sophisticated equipment to control the tempering process and this is energy intensive, whereas smaller chocolatiers are limited to hand tempering only small batches at a time.

Research of cocoa butter and its role in tempering

The new research published in Nature Communications investigated the effects of introducing small amounts of isolated minor components into cocoa butter and chocolate. In this paper, Dr Alejandro Marangoni together with his University of Guelph group members, Jay Chen (chemistry student), Saeed M. Ghazani (research associate), and Jarvis A. Stobbs (masters student and associate scientist at the Canadian Light Source synchrotron) go into great detail on the effect of these compounds. The study investigated a particular class of lipid molecules, known as phospholipids, that could be used to induce the formation of optimal properties in cocoa butter and chocolate.

In the process of characterising the mechanical properties of both commercially tempered and non-tempered chocolate, against samples with and without the addition of dimyristoylphosphatidylcholine and dipalmitoylphosphatidylethanolamine, they found that properly tempered chocolate’s desirable mechanical properties are not only related to polymorph V of the cocoa butter but may be attributed to the microstructure as well. The paper states:

“Proper chocolate tempering typically focuses on the melting behavior of the chocolate, in other words, the polymorphism of the chocolate’s cocoa butter triacylglycerol crystals. Yet, there is little consideration for the microstructure and mechanical properties when determining whether chocolate has been properly tempered or not.”

The research demonstrates that the polymorphism of the cocoa butter is not solely responsible for the hardness or snap of a final chocolate product. The group concludes the microstructure of a chocolate’s mass distribution and fat crystal network contributed to the desirable properties typically achieved from the tempering process. The paper details how non-tempered chocolate contains cocoa butter in form V but has microscale differences in the mass distribution and density. The team used powder X-ray diffraction (Figure 2) and differential scanning calorimetry analysis techniques to show the presence of these form V crystals in all samples.

Other physical properties tempering imparts on a final chocolate product

Along with more traditional techniques to gauge a chocolate’s properties when properly tempered and non-tempered, the researchers used an advanced imaging technique at the Canadian Light Source called synchrotron based radiation micro-computed tomography (SR-µCT). This technique is able to obtain three-dimensional internal information of a sample. The volumetric density distribution of a material is collected non-destructively. In other words, without the need to melt or otherwise alter the samples for analysis as required by traditional techniques. It was observed that the addition of these specific phospholipids to the chocolate before cooling formed a microstructure almost indistinguishable from properly tempered chocolate. The melted and recrystallised commercial chocolate, however, displayed differences in its density and mass distribution (Figure 3). 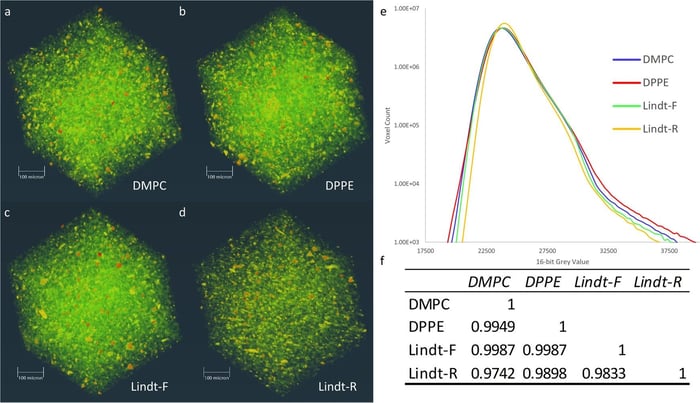 The study emphasises that chocolate tempering not only achieves a specific cocoa butter polymorphism but microstructure as well. The authors highlight the need to paint a broader picture of what the process of properly tempering the chocolate imparts on the microstructure and mechanical properties. They demonstrated a novel way to engineer quality chocolate by the addition of phospholipids that closely match the range of properties a well-tempered chocolate encompasses.

The benefits of reducing or eliminating the tempering process of chocolate are broad, from reducing the effort, time, and resources involved in production to a better shelf life by preventing fat bloom. This is applicable to both small- and large-scale operations. Industrial scale chocolate tempering uses a significant amount of energy. This discovery could help reduce the operating costs and environmental impact of large-scale tempering machines by reducing the energy needed to heat and cool during the tempering process. This theoretically should also reduce the final consumer price of chocolate.

The addition of phospholipids can help smaller chocolatiers achieve a more consistent and high-quality chocolate and help prevent batches of improperly tempered chocolate being discarded or re-tempered. Lastly, a chocolate that is mistakenly left in, say, a warm car and melted could re-solidify back and still be enjoyed as it was intended to be. Jarvis A. Stobbs, Plant Imaging Lead and Associate Scientist at the Canadian Light Source Synchrotron and Food Chemistry Masters student at the University of Guelph.

After completing a diploma in chemical technology at the SIAST — Kelsey campus in 2011, he worked as a metallurgical technician for a potash company for several years before starting at the Canadian Light Source (CLS) in 2014. Jarvis is group lead of the strategic group Plant Imaging within CLS where he and his team consult, plan, and execute experiments of external users to the facility. The group together specialise in applying a wide range of advanced synchrotron analysis techniques to a wide range of agricultural-based research including food sciences. Much of the agricultural work they conduct utilises techniques such as micro computed tomography, X-ray fluorescence spectroscopy imaging and mid-infrared micro-spectroscopy imaging.

FSTA is quality-checked by experts in food-related sciences and contains a wealth of interdisciplinary, food-focused information that you can trust. This makes it a great tool for researching published science on chocolate and so many other topics.

FSTA contains >17,000 records for research into chocolate and chocolate products. This include 12,000 journal articles and reviews as well as >4200 patents.