Not only sweet and friendly, but incredibly important as pollinators of food crops, bees are one of the living creatures humankind are fighting to protect.

The following definitions come from the IFIS Dictionary of Food Science and Technology (2nd edition).

Insects of the order Hymenoptera that are of commercial importance due to the ability of some species to produce beeswax, honeys and royal jelly.

Some bee species of Halictidae or Apidae families have evolved to living in social groups or colonies. One of these species, the honeybee (Apis mellifera), produces a bee colony or comb, constructed of hexagonal cells composed of beeswax, in which to store food (honeys), and house insect eggs and larvae and the reproducing female bee or queen. Bees also have an important role in pollination of plants, including fruit trees.

Yellow-coloured substance secreted by bees to make honeycombs. Solid, but easily moulded when warm. Consists of esters, cerotic acid and hydrocarbons. Used to make edible wax coatings for foods and edible films. Aqueous extracts may be used as flavourings. 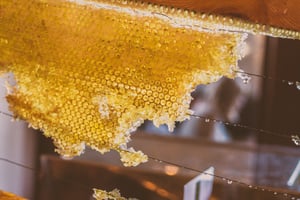 Honeys also contain the flavour compounds and aroma compounds present in the nectar or fruit juices collected, composition of which is dependent on its botanical origin, and it is these minor components that give honeys their individual flavour. Honeys are collected from honeycombs, where they are stored, and may be used directly as both foods and sweeteners.

An apicultural product. Secreted from the hypopharyngeal glands located in the heads of young worker bees and used in the colony to feed young larvae. The secretions are thought to possess beneficial health properties, and are thus marketed as health foods.

Definitions from the IFIS Dictionary of Food Science and Technology (2nd edition), available through Wiley.