Honey - The Bees Have Buzzed Off!

Honey has long been consumed by humans. Reports suggest that it has been collected for at least 10,000 years, and, in addition to its use as a food source, it also has cultural and religious significance in many countries. Furthermore, honey has an extensive history of use in health care for the treatment of a multiplicity of ailments.

Among the many health benefits attributed to honey are its favourable effects on cardiovascular health. Compared to other sugar sources, evidence suggests that consumption of honey can lead to more modest rises in blood glucose and insulin. It has also been found to lower blood lipids and LDL-cholesterol, and elevate HDL-cholesterol. 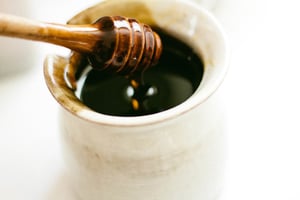 Honey has also been shown to have anticarcinogenic properties, with studies demonstrating its effects in a variety of cancer cell types. In addition, it is also claimed that honey can help improve sleep, reduce anxiety, enhance the immune system and positively affect heart disease, osteoporosis, depression, memory loss and dementia. Furthermore, it is known to possess antioxidative and antimicrobial activities, as well as wound healing properties.

The health benefits of honey may be ascribed to its rich composition. Honey is largely composed of an almost equal ratio of glucose to fructose but, in addition, contains smaller quantities other sugars, notably maltose and sucrose, as well as vitamins, minerals, free amino acids, proteins, volatile compounds, flavonoids and phenols. The exact composition of honey, however, can vary depending on its botanical origin. This, in turn, influences its flavour and colour, allowing for the production of honey in a multitude of varieties.

The honey bee, responsible for the production of honey, is also vital for the pollination of many commercially important crops. Together with other pollinators, this indispensable insect is claimed to be worth over £400 million per year to the UK economy. In recent years, however, honey bee populations in many areas of the world have been in decline. Notably, large numbers of bees in the USA have been lost to Colony Collapse Disorder (CCD), and possible cases of this condition have also been reported elsewhere.

The exact trigger of the disorder, responsible for wiping out entire colonies of bees, is not fully understood; however, a number of possible causes have been proposed. One potential cause is the presence of pests and pathogens in the colony. The mite, Varroa destructor, a group of RNA viruses carried by the mite and the fungus Nosema cerenae, have all been implicated in the disorder. Although, individually, it is thought that these pathogens are unlikely to be the sole cause, recent research has indicated that infection with both the Nosema fungus and the RNA viruses may lead to colony collapse. Furthermore, the mite may increase the virulence of the viruses; when ingested by the mite and injected back into the bees, they can be far more harmful than when passed naturally from bee to bee.

Although it is widely agreed that pests and pathogens are involved in CCD, some scientists suggest that they are not the cause, but rather a symptom of a weakened immune system. This, in turn, may be related to malnutrition. Research has shown that bees fed pollen from a variety of sources have healthier immune systems than those fed on a single type.

Recent reductions in plant biodiversity have reduced the range of pollen available to bees, and may therefore be linked to falling bee numbers. In the UK, for example, some 97% of species-rich hay meadows have been lost in the last century, together with huge reductions in other habitat types. At the same time, monocultures of crops have increased in extent, and herbicides have demolished the flowering weeds that once dotted cultivated fields. Conversely, it seems that bees in cities may be faring considerably better, with urban gardens providing a variety of plants from around the globe.

A further factor that may be involved in the decline of bees is the use of insecticides. In particular, systemic neonicotinoid pesticides such as imidacloprid have been blamed. Although evidence for a link between these pesticides and CCD is currently inconclusive, their use has been restricted in several countries due to reported negative effects on bees. Such effects include behavioural changes such as disorientation, feeding problems and communication disturbances, which may impair the ability of bees to find their way back to the hive after foraging.

As of yet, however, no single factor has been confirmed as the cause, and it has been proposed that a combination of many factors could be to blame. Research projects are continuing in their attempt to solve the mystery and, in the meantime, it is hoped that other measures may help improve the situation. Experts, for instance, are encouraging urban bee-keeping to help reverse population decline, while agri-environmental schemes may help increase plant biodiversity on farmland. With luck, such measures will help prevent our bees from buzzing off.