Is Breakfast the Most Important Meal of the Day? 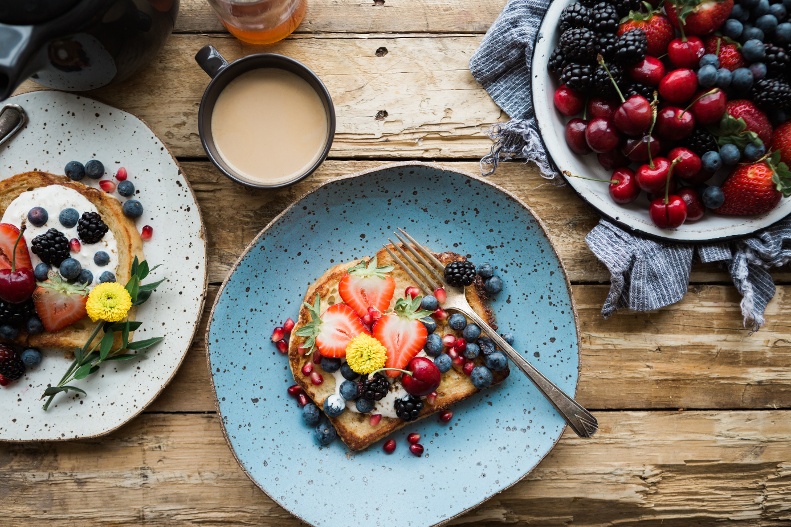 Breakfast on the brain?

Breakfast, we’ve all been told countless times, is the most important meal of the day. It is claimed that a good breakfast can provide us with the energy needed to start a new day, offer a good source of important nutrients and fibre, helping to contribute to a more nutritionally complete diet overall, and even reduce the risk of becoming overweight or obese, or developing high blood pressure, heart disease, or type 2 diabetes.

In addition to being good for our health, eating – or not eating – breakfast has also been linked to effects on our cognitive performance, alertness, concentration, and mood. It is claimed that eating breakfast can enhance memory, improve concentration levels and mood, decrease stress, and improve attention span.

Having good cognitive function is important for everyone, not least children and adolescents whose academic performance could be affected by the lack of a morning meal. Not eating breakfast has been linked to reduced memory function, poorer attention spans, and reduced performance in tasks requiring concentration in children, while habitually consuming a breakfast that is inadequate in quality and quantity has been associated with poorer test scores.

Despite widespread recognition of the numerous positive effects of eating breakfast, many people, for whatever reason – be it a lack of time or a lack of hunger – get up and go about their days without so much as nibbling on a slice of toast, and this includes many children and adolescents. For example, it was revealed in one study that 14% of UK children (aged 5-15 years) did not eat anything before school, with a third of these reporting not eating anything until lunchtime.

In another study, this time in Nigeria, 78% of secondary school students were reported to skip breakfast, while a study carried out in Saudi Arabia revealed that, although 40.83% of the girls surveyed ate breakfast daily, 23.33% only ate breakfast once a week or less often, and breakfast skipping increased with increasing age.

Effects of breakfast on cognitive performance

So how does the cognitive performance of breakfast skippers compare with that of those who eat it? Several studies have been conducted over the past few years that may provide the answer.

One study demonstrated that children aged 6 – 16 who had eaten breakfast showed superior performance in cognitive tests for attention and episodic memory compared with those who had not.

What’s more, when examining the effects of breakfast consumption on cognitive function, mood, and blood glucose concentration in adolescent school children, a further study found that participants who had consumed breakfast, compared to those who had not, exhibited:

The Stroop test, which tests the effects of interference on the reaction time of a task, involves looking at the name of a colour printed in colour not denoted by the name, and naming the colour rather than reading what the word says. For example, for the word ‘red’ printed in blue, the correct response would be ‘blue’, rather than ‘red’.

The Sternberg paradigm, meanwhile, is a measure of working memory, and involves participants being presented with a list of study items, followed by a test item. The participant has to decide whether the test item was in the original set of study items.

The longer term effects of breakfast skipping, however, are less certain.

A study carried out in Australia, which examined whether skipping breakfast could predict poorer academic performance two years later, found that children classified as ‘breakfast skippers’ at the start of the study were slightly more likely to be in lower teacher-reported reading and overall academic achievement categories than non-skippers two years later, and also had lower mean National Assessment Programme – Literacy and Numeracy (NAPLAN) scores than non-skippers. However, it was acknowledged that these differences were small and not statistically significant.

Another study also revealed less significant differences between breakfast eaters and breakfast skippers. In this study, the effect of breakfast consumption on nutritional status, blood glucose, blood Fe, and cognitive performance among female students aged 9 – 13.9 from Saudi Arabia was examined. The study revealed that, while the girls who skipped breakfast were more likely to be overweight or obese, eating breakfast regularly had no significant impact on test grades.

Still more studies have made use of technology to measure differences in brain activity resulting from the consumption or omission of breakfast.

In one study, for example, electroencephalographic (EEG) activity was recorded while children of 8 – 11 years solved simple addition problems after an overnight fast and again after either having eaten or skipped breakfast. The EEG activity showed that children who continued to fast had increased theta activity, suggesting greater demands on working memory and increased alpha activity, which may facilitate task-essential activity by suppressing non-task essential activity. In addition, the children who had eaten breakfast showed an increase in correct responses while children who continued to fast did not.

In another study, functional magnetic resonance imaging was used to investigate differences in the cognitive function of adolescents depending on whether they had eaten breakfast or not. Although no statistically significant improvement in task performance was observed, significantly higher activation in the frontal, premotor, and primary visual cortex areas was recorded in the breakfast trial compared to the fasting condition.

It is not just the eating (or not) of breakfast that can have an impact on cognitive performance, however. What the breakfast consists of can also have an effect. 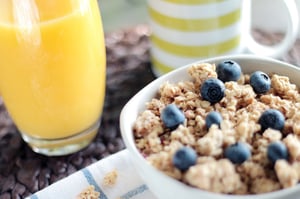 One study, which looked at health-related behaviour (including physical activity, nutritional quality of breakfast, and sleep), personal variables (such as self-esteem, attitudes to physical activity, and gender), and socioeconomic status in relation to literacy and numeracy scores in 3 – 7 year old children, showed that the nutritional quality of breakfast was among the factors linked to higher literacy scores in students.

Another study examined the effects of different types of breakfast cereal (Cornflakes, Rice Krispies, and Rice Krispies Multigrain) on parents’ perceptions of the alertness, cognitive function, and other aspects of well-being of their children, such as mental health, physical health, and digestive problems. The study showed that the consumption of all three types of breakfast cereal was associated with reports of lower depression, emotional distress, and fatigue, as well as greater alertness, fewer cognitive problems, and fewer minor symptoms and bowel problems.

Several studies have also indicated that the glycaemic index (GI) and glycaemic load (GL) of a breakfast can have an impact on cognitive performance and mood.

Other studies have revealed that exercise can have interactive effects with breakfast consumption that impact on cognitive function.

One study examined the interactive effects of breakfast and exercise on cognition and mood, and concluded that breakfast before exercise appeared to be beneficial for post-exercise mood even when a post-exercise snack was consumed, and that exercise reversed post-breakfast cognitive impairment in active males.

A further study examined the combined effects of breakfast glycaemic index and mid-morning exercise on the cognitive function of adolescents. The participants consumed either a high or a low GI breakfast before undertaking exercise or continuing to rest, and a visual search test, Stroop test, and Sternberg paradigm were performed to assess cognitive function 30 minutes before, and 45 minutes after, the exercise.

The study found that, following the low-GI breakfast, response times on the complex level of the Stroop test improved across the morning in both the exercise and resting trials, with the improvement being greatest in the exercise trial. In addition, response times improved across the morning for the Sternberg paradigm following the low-GI breakfast, regardless of whether any exercise was completed. Following the high GI-breakfast, however, response times only improved in the resting trial for the complex level of the Stroop test, and only in the exercise trial for the Sternberg paradigm, indicating that the combined effect of the GI of the breakfast and exercise depended on the component of cognitive function examined.

Breakfast on the go

So, all in all, it looks like it really is worth making the effort to grab some grub in the morning – and maybe even making it something with a low GI!

But what do you do if you really don’t have time or can’t face any food first thing?

Breakfast products to eat on-the-go could offer the solution, and they seem to be gaining in appeal. Recently there have been numerous product launches for breakfast biscuits, easy-to-make porridge pots, and even breakfast sandwiches and burritos. Liquid breakfasts, too, have been making a splash in the breakfast-on-the-go sector.

With so many on-the-go options appearing for breakfast, perhaps breakfast skipping will soon become a thing of the past, or at least not so common. I’m certainly starting to crave my next one.