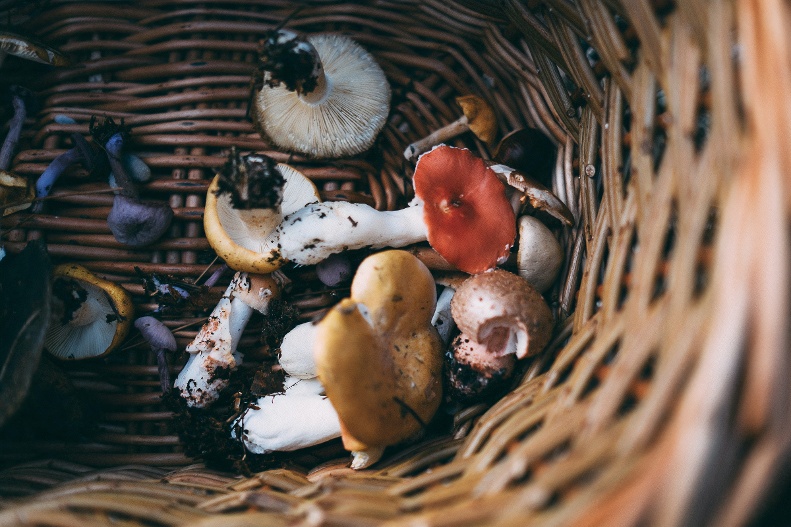 The leaves are changing colour and falling from the trees, the weather has turned wet and windy, and the nights are drawing in. Autumn is well and truly here. But while the downturn in the weather can sometimes have us feeling a little gloomy, the coming of autumn is also a time that gets many people thinking about going out into the countryside to pick fruit from heavily laden trees and explore the forest floors for curious forms of fungi.

There are estimated to be over 50,000 species of edible plants in the world and many different edible mushrooms, yet in the industrialised world almost all of our food comes from just a handful of species, picked not from the trees but from the supermarket shelves.

Over the generations, harvesting food from the wild has gone from being a part of everyday life to an activity rarely, if ever, carried out. Primitive man gathered many different species from his surroundings, but while some of these were domesticated and bred to suit modern cultivation conditions, others became underutilized and forgotten. Thanks to an increased awareness about wild foods, a growing number of people are starting to take an interest in foraging. Obtaining food in this way brings us the benefits of new flavours and textures to try, as well as an opportunity to reconnect with where food comes from. But while in the developed world foraging for food is usually viewed as little more than a fun activity, in other areas of the world it plays a far more important role.

Gems of the wild

Food security is defined by the World Health Organization as “a situation that exists when all people, at all times, have physical, social and economic access to sufficient, safe and nutritious food that meets their dietary needs and food preferences for an active and healthy life”. The ability of foods to provide sufficient nutrients is considered an important part of this. Sadly, for many people living in developing countries this is a situation that does not exist, and the insufficient content of micronutrients in the diets of those in this situation can lead to negative impacts on health.

Numerous studies analysing the composition of wild vegetables from all corners of the globe have found them to be rich in a diverse array of micronutrients. In a study on the basal leaves of several non-cultivated vegetables traditionally consumed in Spain, for instance, two species of dock, Rumex papillaris and R. pulcher, and the field poppy Papaver rhoeas were revealed to be rich in vitamin C, while R. pulcher, P. rhoeas and Anchusa azurea (Italian bugloss) were reported to have promising antioxidant properties related to their high levels of phenols and flavonoids. Meanwhile, a study on the proximate composition of 10 wild plants consumed in 3 Native American reservations in North Dakota, including chokecherries, lambsquarters and prairie turnips, found these plants to be high in various nutrients, including the minerals manganese, iron, calcium and magnesium, vitamins B6, C and K, carotenoids and folate. In the Oyam district of Uganda, where indigenous wild food plants provide an important source of nutrients for the inhabitants, a further study found many of these plants to be a rich source of elements. Copper leaves, for example, were found to have an incredibly high concentration of calcium, while high levels of iron were found in swamp hibiscus leaves, African spider flowers, tamarind fruits, black night shade and Jews’ mallow.

Resources to be relished

Such reports support the idea that wild edible plants could help combat micronutrient deficiencies and relieve household food insecurity, a concept that has been considered on numerous occasions. Even when a cultivated staple food is available, there is evidence that wild vegetables could still play an important role. In the corn-based subsistence farming sector of rural South Africa, vegetable-based relishes are eaten alongside the main staple - a corn meal porridge known as phutu. Among the most impoverished groups of the rural population, wild vegetables are used as the main source for the relishes. Because phutu would not normally be consumed without a relish to complement it, research has suggested that wild vegetables, despite only being consumed in relatively small quantities, directly impact the consumption of the main staple, thereby having an important role in the management of hunger as well as micronutrient deficiencies.

Wild vegetables can also help bridge the gap when conventional food sources are scarce. This is important in countries such as Ethiopia, which has been affected by recurrent drought and famine. Here, there are reported to be hundreds of edible species of wild and semi-wild origin that are consumed by the rural communities. Consumption of these species has often been regarded as a sign of poverty, but could provide a vital way to alleviate micro- and macronutrient malnutrition and ameliorate food insecurity. As is the case for various other wild vegetables growing around the world, however, the content of anti-nutritional factors such as tannins, phytates and oxalates, which could impair the bioavailability of nutrients and cause health problems, is a concern. A study looking at the composition of the most preferred underutilized edible plants from southern Ethiopia suggested that although bulk consumption of vegetables containing a high level of anti-nutritional factors in one meal should be avoided, many of the vegetables studied were good sources of several minerals, having levels comparable or higher than those of conventional vegetables, as well as a good content of fibre and protein.

As the gap between the human population and the food supply increases, the diversification of food sources will become ever more important to fulfil our needs. Wild plants could offer a solution to some of the problems we will face, but regrettably they might never be used to their full potential as a number of factors work to threaten the survival of these species and the knowledge of how to use them.

When researchers documented underexploited, non-conventional, traditional and indigenous wild vegetables in rural areas of Kannauj district, Uttar Pradesh, India, they noted that traditional knowledge about the wild indigenous vegetables was passed down from generation to generation by spoken word without any written record. Confounding the problem, it was the elder generation who held the most knowledge about the usages of the wild vegetables while the younger generation had very little interest. The practice of passing on knowledge orally is not uncommon among rural and tribal communities around the world, and as more and more once isolated communities are exposed to the modern world, traditional knowledge about wild species comes under increasing threat of being lost for good.

The unregulated manner in which wild vegetables are harvested can also sometimes be regarded exploitative and unsustainable, particularly in view of the increasing population size and the growing pressure on natural habitats. In the same study, it was noted that some 44% of the vegetables documented were threatened with being lost if not conserved properly, and some were reported to be highly endangered. The depletion of natural resources is not just a problem affecting developing countries. Warnings are issued each year here in the UK due to the damage done to ecosystems by overenthusiastic foragers. These factors, together with the attitude of some that these plants are merely weeds, threaten the loss of what could be a highly valuable resource.

There is a huge amount of diversity out there in the wild that we could use to our advantage: some already well-known of and widely used, some in danger of being forgotten and some yet unexplored. The question is, can we find a way to sustainably use what the wild has to offer before it is too late?

Photo by Annie Spratt on Unsplash