A Matter of Taste – The Neuropsychology of Flavour Perception

Most people enjoy eating. In this age of plenty, food has become a source of pleasure to an extent that goes way beyond its ability to provide us with sustenance. However, this sense of pleasure is a complex issue. Take cheeses for example. Each has its own particular combination of flavour compounds and sensory properties – Brie is clearly distinguishable from Cheddar, ripened cheese tastes different to fresh cheese, and so on. But why does my husband have to leave the room, retching dramatically, when the rest of my family salivate in anticipation as we sprinkle parmesan on our minestrone?

It’s because of his brain. The eating experience is influenced not only by the properties of the food itself, but also by the way in which the brain processes the stimuli presented to it during eating. Moreover, this processing is not merely a factual filing of information; it also invokes memories and generates emotional responses. These responses can then go on to determine our future eating behaviour.

Response of the brain to taste messages

From the brainstem, the messages are passed on, via relay neurons, to other parts of the brain, including the limbic system and the cerebral cortex. The frontal cerebral cortex is the area in which conscious identification of messages and other related thought processes take place, whereas the limbic system, which includes the amygdala, hippocampus and hypothalamus, plays an important role in the formation of emotional responses and memories. This explains to some extent why our response to food flavours has not only a conscious rational component, over which we have some control, but also a slightly mysterious emotional aspect, whose origins are not entirely clear to us.

Because the brain’s response to the process of eating is very complex, our perception of what we think of as the flavour of a food is influenced not just by the nature of the food itself, but by a wide range of other external factors.

Studies have shown, for example, that ratings for sweetness, intensity and liking of cheesecake are influenced by both the colour and the shape of the plates on which it is served, and that crisp packet colour is associated with specific flavours in different ways in the minds of Colombian, Chinese and British study participants. In experiments on chocolate bars, consumers linked sweetness with round shaped products and bitterness with angularity, and testers of juice given a greenish hue by the addition of a dye with no flavour gave it higher sourness ratings than juice that didn’t contain the dye. These associations between apparently distinct properties of foods and beverages are described as crossmodal.

Perhaps the most interesting crossmodal associations are those between sound and flavour perception. These are responsible for the results of the neurogastronomic experiments carried out in the UK by head of the Crossmodal Research Laboratory at Oxford University, Charles Spence, in conjunction with the chef of the Fat Duck restaurant, Heston Blumenthal. They discovered, for instance, that oysters tasted better when eaten listening through headphones to the sound of the sea than they did while listening to a farmyard of clucking chickens; similarly, the farmyard noises afforded little pleasure to consumers of bacon and egg ice cream who reported that it tasted significantly more “bacony” when accompanied by the sound of bacon sizzling. 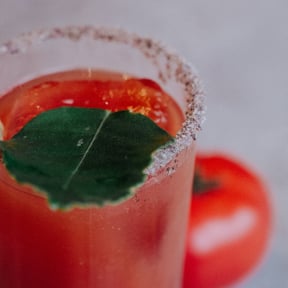 Loud background noise also influences flavour perception. Researchers have shown that listening to white noise through headphones can lead to significant reductions in perception of saltiness and sweetness. Anecdotal evidence exists to suggest that perception of umami flavour is relatively unaffected by such background noise, providing a possible explanation for the observation that passengers are more inclined to name an umami-rich Bloody Mary or tomato juice as their tipple of choice when exposed to the loud background noise experienced in an airplane.

Crossmodal relationships have also been observed between music and food. Associations exist between particular flavours and musical notes, and the pleasure derived from foods can be influenced by background music. In one study, participants’ enjoyment of food stimuli was significantly greater when listening to jazz music than to hip-hop, and in another investigation, the pleasure derived from particular wines was enhanced when the wines were paired with specific pieces of classical music; for instance, the Pouilly Fume sampled during the experiment went particularly well with Mozart’s flute quartet in D major.

In conclusion, flavour perception is a multisensory affair. If you want to enjoy a particular meal, take care to select the appropriate background noise, choose the colour and shape of your plate wisely and try not to become too emotional.

Photo credits: Klara Kulikova on Unsplash and anlebed91 on Pixabay