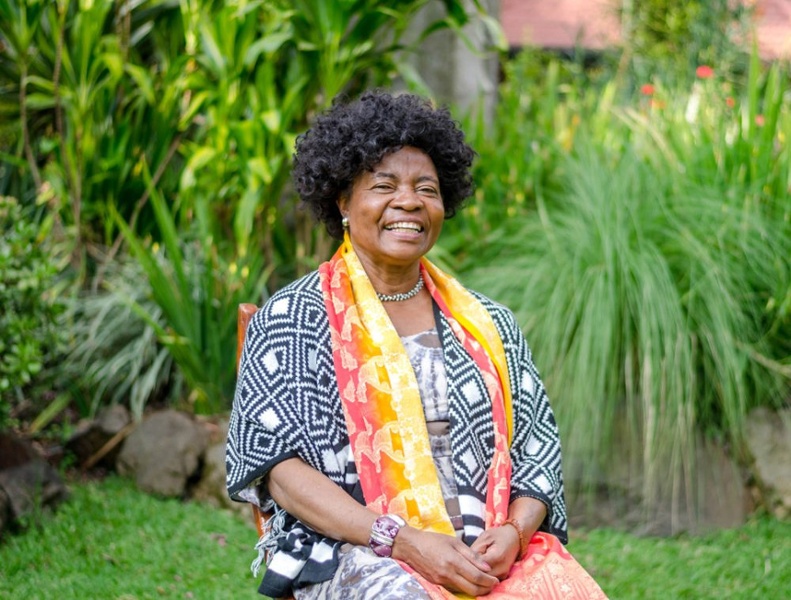 Professor Ruth K. Oniang’o was educated in Kenya and the USA. She has worked in Kenya throughout her professional life, gaining her international experience through meetings and conferences and through participation in multi-national dialogues. Beyond her academic training, she has spent a considerable amount of time researching and talking about food security and hunger issues.

Ruth is the executive director of the Rural Outreach Program, a non-profit development organisation that empowers women through agriculture and entrepreneurial projects. She was a nominated member of Kenya’s ninth parliament from 2003-2007 and served as Shadow Minister for Education. As a parliamentarian, she was Vice-Chair of Kenya’s Women Parliamentary Association and worked on the Sexual Offences Bill with fellow women colleagues – a landmark bill regarding punishment for sexual violence in Kenya. She also championed the passing of the Kenya Biosafety Bill and the Nutritionists and Dietetics Bills.

Before becoming a member of the Kenyan Parliament, Ruth was Professor of Food Science and Nutrition at the Jomo Kenyatta University of Agriculture & Technology in Nairobi , Kenya.

Her areas of research and consultation are household food and nutrition security, women’s nutrition, child health, and community-level agro-processing and related enterprises.

Professor Oniang’o is the founder and editor-in-chief of the African Journal of Food, Agriculture, Nutrition, and Development (AJFAND). She serves on a number of Boards - HarvestPlus, IRRI, IFDC (until a year ago) - to name but a few.

The recognition that, though not explicitly spelt out in the United Nations Millennium Development Goals (MDGs), good nutrition is inherently part of what is needed to ensure survival and good health of young children.

On the food science side, being able to test for aflatoxins in food grains has been a major breakthrough, as this is a fungus that can cause cancer in humans and even death if found beyond certain levels.

You have spent a great deal of your time researching food security and hunger issues. What do you recognise as the next challenges for those continuing to make advances in our ability to tackle these challenges?

Finding the right way to assist smallholder farmers continues to be a challenge. Getting African governments to prioritise food security and associated aspects, and linking that to physical and national security continues to be a challenge. For sub-Saharan Africa, most farm food is produced by women. It is also cooked, served and processed by women. They need training and support and acknowledgement.

We must continue to look for ways to produce good food, high quality, nutritious and safe in maximum quantities but at least cost or with minimum inputs. Food distribution from where it is abundant to where it is needed is also an issue to tackle.

You are the executive director of the Rural Outreach Program, a non-profit development organisation that empowers women through agriculture and entrepreneurial projects. Can you explain how the Program will benefit farmers and what will be the most important changes, be they practical or attitudinal?

ROP is now ROP Africa and is now in its third decade, and set out to make a lasting behaviour change in women smallholder farmers. We have worked with women mostly upon the realisation that women are loyal, honest and reliable and will participate in any project that is designed to help their children. That assumption was right and has worked well for us, and helped us to build a large constituency of loyal women smallholder farmers whose lives have changed in very positive ways, and who are able to show empirically in what ways ROP has helped them help their families' to lead better lives.

You were Professor of Food Science and Nutrition at the Jomo Kenyatta University of Agriculture & Technology in Nairobi. Your areas of research and consultation were household food and nutrition security, women’s nutrition, child health, and community-level agro-processing and related enterprises. Can you describe the relationship between the University and the Kenyan food industry? Does this relationship impact on what students go onto after graduating?

Well, I became frustrated teaching at the University well before my retirement age. I just felt that the University was not operating in a way that could address the myriad of problems facing rural households.

The realisation that women carried the brunt of it all touched my conscience and I started on a quest to find resources to help me engage more in rural development, working with rural resource poor farmers.

Soon after I got a chance to serve in the Kenyan Parliament and that gave me a positive profile that helped my rural development work. The direction I took has hopefully influenced the practices at our local universities, to realise that a major part of their mandate should be to find solutions to national problems of development and livelihoods. I served in the Parliament for five years between 2003 -2007.

You are the founder and editor-in-chief of the African Journal of Food, Agriculture, Nutrition, and Development (AJFAND). The journal was initiated in 2001 with issue 59 set just released. Have your original vision, mission and objectives changed over the years?

AJFAND started very small, with seed money contributed by friends. The journal has performed beyond my expectations. We are now working on issue 60. It has now been standardised so that each issue carries 16 peer reviewed articles, some relevant reprints, opinion pieces, and often an editorial or commentary by myself. We invite Guest Editors too. The rigorous peer review process has seen articles improve in quality. Also, the new communications technology has marketed us immensely and so we just receive manuscripts on a regular basis without solicitation. The journal set out to capacity build budding African scientists and to give exposure to those already in the profession. It has achieved more than what we set out to achieve. I am happy. Funding continues to be a challenge, though.

In the next 12 months, what do you hope to achieve, promote or advance?

I hope to continue advancing the objectives of the journal, making my voice on food security and hunger issues heard through it, and to assist student interns so they can take up the role of editing the journal and others even after my time. I serve on many advisory boards now, both local and international and my agenda for the next 12 months is very busy.

Join me, to make the world a better place.